The premiere of Max and Moritz Children's Opera has created a sparkling mood shared with the most sincere and grateful audience - the children's one. At such moments, one realizes that there is a need for such tales - for small, big, even bigger, and for those who have forgotten that they were children ...
Funny happenings, mischievous acts of the iconic Kalpazans Max and Moritz, who embarrass and invent original whites wherever they occur, an instructive end, of course, not like in Wilhelm Bush's children's book, where the characters are punished much more severely. ..
In the children's performance of Alexander Yosifov's music, the rascals get their credit, at the finale everyone is happy. Magnificent emotion created the premiere of "Max and Moritz" on the Burgas stage! And the children's eyes were really warm and grateful.
After the finale, they were queued to take the stage with their favorite characters and the creators of a wonderful show created to give them joy!

The conductor of the musical performance is Tsanislav Petkov. The director of the extremely cheerful and dynamic production is Alexander Tekeliev. The set design is by Ivan Tokadzhiev, the attractive costumes are by Anna-Maria Tokadzhieva. The various dances are the work of Galina Kalcheva. The assistant directors of the production are Lina Peeva and Peter Tiholov.

The roles of the premiere production today were: Stefka Hristozova -  Max, Vesela Apostolova - Moritz, Branimir Nedkov - in the image of Writer Bush, Aunt Greta - Lina Peeva, Yani Nikolov - in the role of Musician, Master Boek - Peter Tiholov. Diman Panchev took on the role of the strict but fair Baker, and Miroslav Dimitrov was the Artist. 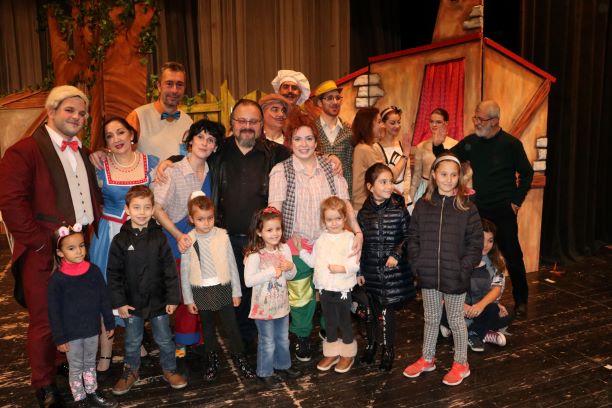