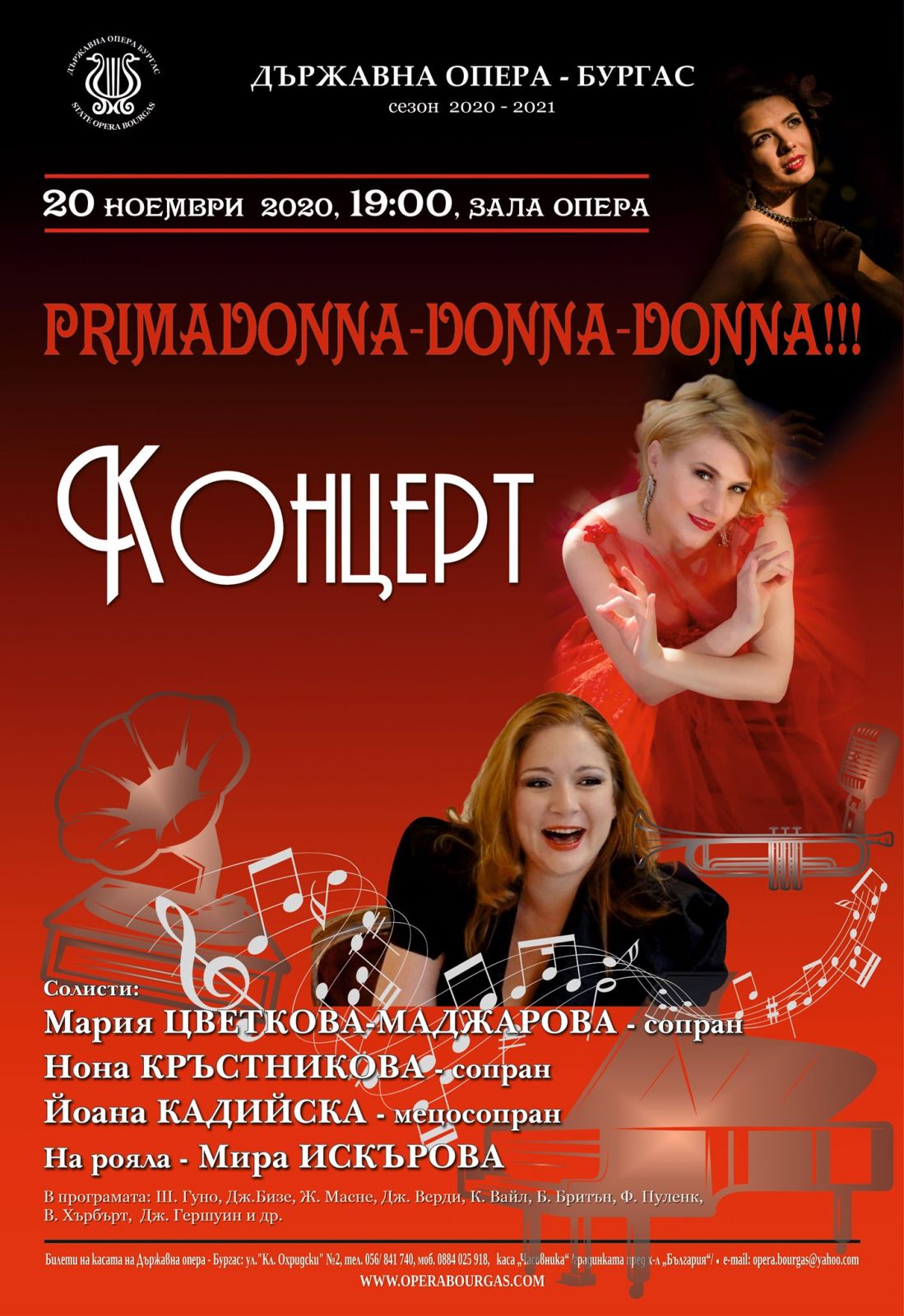 After the first musical event for this month, after the temporary closure of the cultural institution - the chamber concert, which took place on November 18, the State Opera - Burgas presents an extremely original event - PRIMADONNA-DONNA-DONNA. The three main actors in the concert performance, which will charge the fans of good music with the much-needed positivism for modern realities on Friday, November 20, at 7 pm, in the Opera Hall, are the charming soloists of the Burgas Opera - sopranos Maria Tsvetkova-Madzharova , Nona Krastnikova and mezzo-soprano Ioana Kadiyska. The unique artistic trio was formed during the successful chamber concerts, included in the thematic summer weekends of the Municipality of Burgas, as well as during the visit of the classical music festival in Balchik and concert events in other coastal cities. The joint stage performances of the three primаs were welcomed by music lovers, who found in the interpretation of famous arias and songs from the repertoire of world composers individual approach, sense and depth in conveying the messages encoded in the musical text, combined with emotion.
The three opera singers share their impatience to present moments of contact with the art of the Burgas audience, as well as the guests of the city, in today's difficult times:
"I think the program will be very interesting for the audience, and people will be able to relax and move in at some time that is out of the bad news. We need our audience and we have something to give them!”, Says the soprano Maria Tsvetkova-Madjarova, who prepared for the concert an Aria from Faust by Charles Gounod, an Aria by Leonora from Troubadour by Giuseppe Verdi successful debut in this role in July, at the Summer Theater, in a stage partnership with world tenor Kamen Chanev /, songs by Francis Poulenc and one of the most popular and beloved compositions of George Gershwin - Summertime.
"PRIMADONNA-DONNA-DONNA is our joke with the audience. We get along very well with each other and have no diva claims. I would say that the idea of ​​our director Alexander Tekeliev for the concert is exceptional - there will be serious arias, cabaret songs, as well as melodies that have become jazz standards", said Nona Krasnikova, soprano, about the upcoming exciting event. A little more than a month ago, Nona Krastnikova played a memorable role on the Burgas stage as Mimi in Giacomo Puccini's opera Bohemia, conducted by maestro Ivan Kozhuharov.
"The program is very diverse - popular arias that every one of our fans knows, there will be surprises, but let them stay for now so that the audience can enjoy them. We are waiting for you - with the greatest excitement and impatience, in these difficult and difficult times", addresses the audience mezzo-soprano Joanna Kadiyska, who at the end of September was brilliant on the stage of the Burgas Opera, entering the role of Beautiful Elena in the comic opera by Jacques Offenbach.
On the grand piano on Friday night in the Opera Hall will be the pianist Mira Iskarova, with whom the three opera singers already have a solid number of joint chamber performances. Mira Iskarova is known among film and theater circles as a composer of music for a number of successful theater productions and film titles.
The diverse program of PRIMADONNA-DONNA-DONNA includes vocal works by: Charles Gounod, Georges Bizet, Jules Massenet, Giuseppe Verdi, Kurt Weil, Benjamin Britton, Francis Poulenc, Herbert. George Gershwin.

IMPORTANT:
According to the requirements of the Ministry of Health, those present at the concert must wear protective masks, and all necessary anti-epidemic measures will be taken in the hall. The admissible capacity of presence in the hall is 30%. 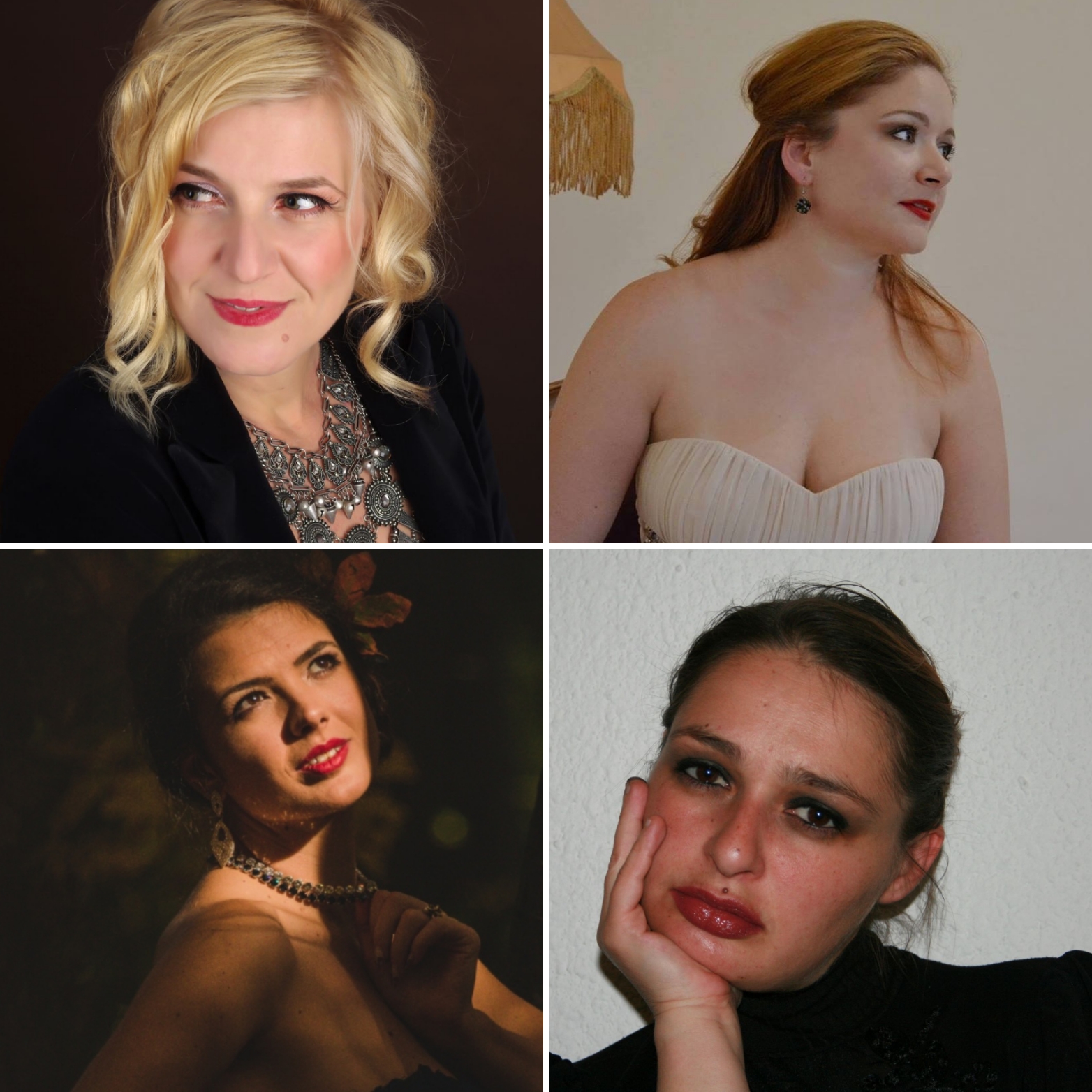 Maria Tsvetkova-Madzharova, soprano, was born in Burgas. He graduated from the State Academy of Music "Professor Pancho Vladigerov" - Sofia in the opera singing class of Prof. Resa Koleva. Soloist of the State Opera - Ruse and the State Opera - Burgas. She has performed on the stages of the National Opera-Sofia, State Musical Theater "Stefan Makedonski" - Sofia, as well as in the theaters of Varna Opera, Plovdiv Opera, Stara Zagora Opera. He has repeatedly participated in international projects with tours in Italy, France, the Netherlands, Belgium, Germany, Austria, Switzerland, Spain, Portugal, USA. The singer's rich repertoire includes Susanna and the Countess from "The Wedding of Figaro", Despina, Fiordiligi from "So Do All Women", Donna Anna, Zerlina from "Don Juan", Blonda, Constanta from "Abduction from the Shed" by Mozart, Rosina from Rossini's The Barber of Seville, Violetta from La Traviata, Gilda from Rigoletto, Oscar from Verdi's Masked Ball, Adina from Love Elixir, Norina from Donizetti's Don Pasquale, Musetta and Mimi from "Bohemia", Liu from "Turandot" by Puccini, Stasi and Silva from "The Queen of the Czardas" by Kalman, Adela from "The Bat" by Strauss-son, Maria Desislava from the opera of the same name by Parashkev Hadjiev, Katerina Izmailova from the opera of the same name by Shostakovich and other. Winner of "Crystal Lyre" for 2015. Musician of the Year for 2017 in the survey of the classical music show "Allegro Vivace" on the program "Horizon" of the Bulgarian National Radio.

Nona Krastnikova, soprano, graduated in opera singing with Prof. Mila Dyulgerova at the Pancho Vladigerov National Music Academy and has been working with her as a vocal pedagogue. She has specialized as a fellow in Modena, Italy, with Raina Kabaivanska and in the opera studio in Graz, Austria. She has participated in master classes by Ana Tomova Sintova (2011, 2014, 2015), Kiri te Kanava and Federica von Stade (2008), for a German song with Prof. Hartmut Noll and others. He won third prize at the Mirabent I Magrans International Competition (2014, Sitges, Barcelona); at the International Competition for Young Opera Singers "Boris Hristov" the same year, Grand Prix at the "Crown of Tarnovo" and third prize at the International Competition for Song Duos "Alza Respighi" Verona, Italy. Nona Krastnikova is a full-time soloist at the Burgas Opera, where she has over ten main roles such as Mimi from the opera "Bohemia", Tosca and Madame Butterfly from the operas of the same name by Giacomo Puccini, Amelia from "Masked Ball" by Giuseppe Verdi, the Countess in "The Wedding of Figaro, Donna Elvira in "Don Juan" and Fjordiligi in "So Do All" by WA Mozart, Micaela in "Carmen" by Georges Bizet and others.
Since 2011 he has formed a duo "Collage" with pianist Maria Ruseva. In October 2015, the duo "Collage" won the third prize at the competition for song duos "Elsa Respighi" in Verona, Italy.

Ioana Kadiyska, mezzo-soprano, began her musical career as a soloist of the Children's Radio Choir at the Bulgarian National Radio, with conductor Acad. Hristo Nedyalkov. There she was noticed by the great opera prima Alexandrina Milcheva, who became her vocal pedagogue.
Graduated in opera singing at the National Music Academy "P. Vladigerov ”, in the class of Prof. Svilen Raichev and in 2015 received his master's degree in classical singing. He is currently a doctoral student at the Pancho Vladigerov National Academy of Music.
In 2011 he won the second prize at the XVI International Youth Music Festival-Competition, Dobrich-Albena, "Hopes, Talent Masters". Two years later, in 2013, he won a scholarship from the Boris Hristov Foundation to the Opera Studio at the National Academy of Santa Cecilia - Rome, where he specialized with Senor Renata Scoto, vocal pedagogue Anna Wendy and maestro Cesare Scarton. Among her achievements are: II prize of the XXIV National Competition for Young Instrumentalists and Singers "Svetoslav Obretenov"; an audience award and an award for the best interpretation of a Bulgarian musical work at the International Opera Singing Competition "The Rose of Evterpa in Karlovo"; III prize at the Second International Competition for Opera Singers "Elena Nikolai"; Second prize at the 10th Franz Schubert International Competition and finalist at the International Vocal Competition, Zdar nad Sazavou, Czech Republic.
Over the years he has attended various master classes for vocal and stage skills and work on the interpretation of operas by a number of prominent pedagogues and artists with international recognition, including - Darina Takova, Anna Tomova - Sintova, Carlo Colombara, Fiorenza Kosoto, Bruna Balioni, Larisa Gergieva and others.
In 2018 he became a scholarship holder of the Raina Kabaivanska Foundation and continued his studies in Modena, Italy.
He made his debut on the stage of DMBC "St. Makedonski ”, with the role of Elena in the production“ The Beautiful Elena ”by Jacques Offenbach, directed by Mario Nikolov, under the direction of Yuli Damyanov. Among her creative performances on stage are also:
• the role of Dorabella in "Cosi fan tutte" by VA Mozart, on the stage of the Burgas Opera - director Alexander Tekeliev and conductor Ivaylo Krinchev;
• the role of Zerlina in "Don Juan" by WA Mozart, on the stage of the Burgas Opera - director Alexander Tekeliev and conductor Rafael Feye;
• the role of Olga in "Eugene Onegin" by PI Tchaikovsky, on the stage of the Plovdiv State Opera, director Vera Petrova and conductor Luciano Dintino;
• the role of Madame Flora in "Medium" by Menotti, on the stage of the State Opera of Stara Zagora, director Ognyan Draganov, conductor Victor Krumov
• the role of Susie in Giacomo Puccini's "The Swallow", on the stage of the State Opera of Stara Zagora, directed by Yavor Gardev;
• and others.