10 august 2020 With "Swan Lake" We Celebrate The Anniversary of Prof.Mehmedov The young prima ballerina Ivanina Ivanova debuted in the role of Odeta / Odilia 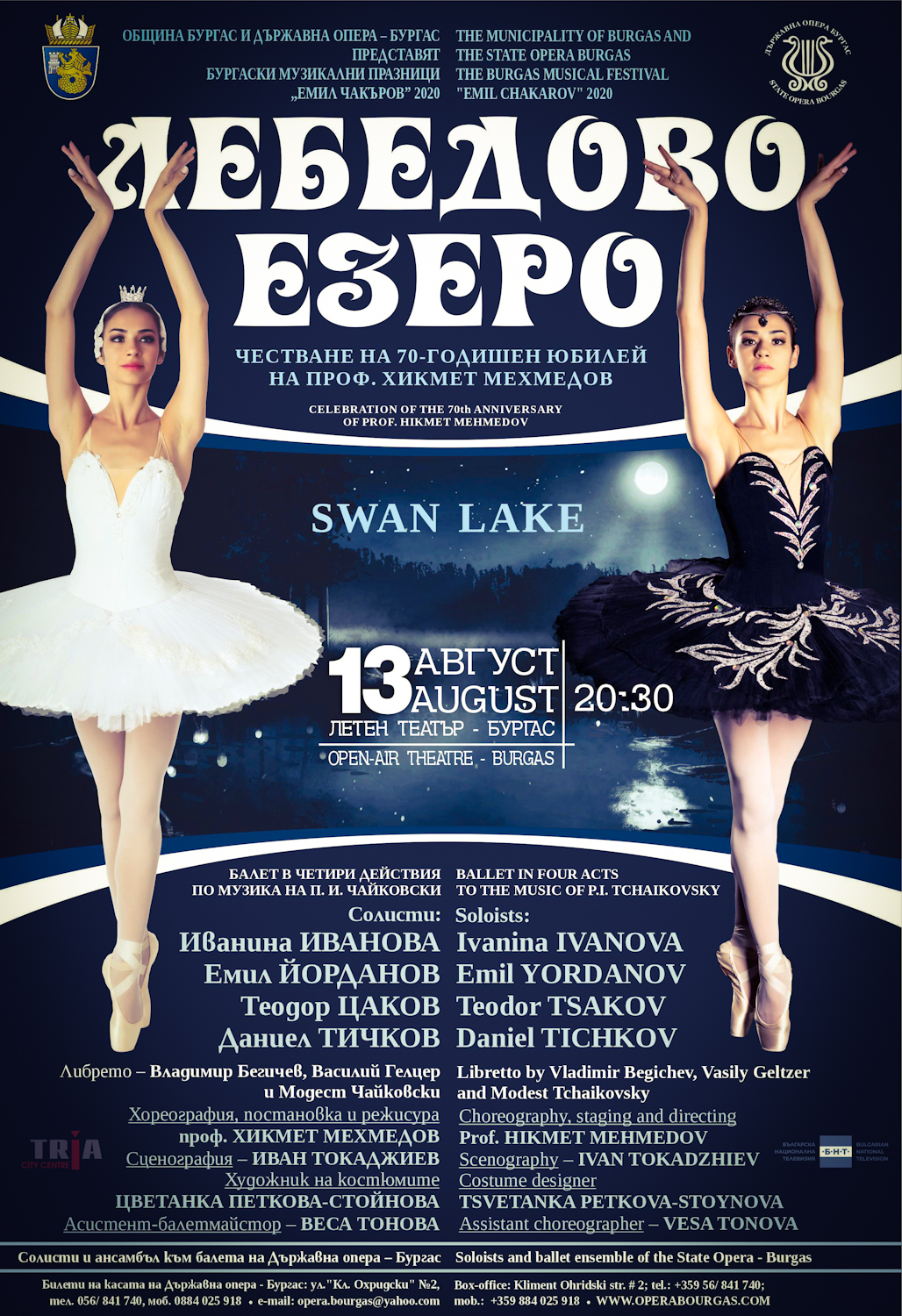 With the "Ballet of Ballets" "Swan Lake" - on August 13, at 20.30, on the stage of the Summer Theater will be celebrated the 70th anniversary of Prof. Hikmet Mehmedov - a great name in contemporary Bulgarian cultural life. The long-time choreographer of the State Opera - Burgas has left his lasting mark - in artistic and aesthetic terms, in the creative production of the Burgas cultural institution. The event is another of the Burgas Music Festival "Emil Chakarov", realized by the State Opera - Burgas, in partnership with the Municipality of Burgas.

At an official ceremony organized by the Municipality of Burgas - on June 18 this year, Prof. Hikmet Mehmedov was awarded a special prize for outstanding achievements in the cultural field - for overall contribution to contemporary Bulgarian cultural life - through the implementation of large-scale and intelligently presented dance performances. Prof. Hikmet Mehmedov expressed gratitude - both to the Mayor of Burgas, for awarding the high award, and to the Director of the State Opera - Burgas Alexander Tekeliev and the entire staff of the Burgas Opera - for the long-term fruitful creative cooperation. The renowned choreographer and director expressed his hope for a peaceful world in which there will be an opportunity for a creative expression of talents.

The premiere of the four-act ballet "Swan Lake", sculpted against the background of Tchaikovsky's immortal music, is on May 30, 2016, at the Opera Hall. The masterpiece in ballet classics was staged for the first time on the Burgas stage. The idea to present "Swan Lake" for the first time in the seaside town belongs to the director of the State Opera - Burgas - Assoc. Prof. Dr. Alexander Tekeliev. The magnificent spectacle, the brilliant soloists, the incredible charge, finesse, synchronicity, and exciting messages reveal the immortal story of the incarnations of love, the enchanted idyll, and an unexpected ending, the apotheosis of the all-conquering power of the brightest feelings. The impressive, large-scale, intelligently presented - with a creative scope and brilliant attention to detail, staging, directing and choreography are by Prof. Hikmet Mehmedov / after Marius Petipa and Lev Ivanov /. Assistant choreographer of the production is Vesa Tonova, the tutor is Galina Kalcheva, longtime prima ballerina of the Burgas Opera, the assistant director is Peter Tiholov. The exquisite costumes are the result of the creative scope of Tsvetanka Petkova-Stoynova, who took care of the hand-attaching of each of the "Swarovski" stones to the aesthetically pleasing stage clothes of the ballet dancers. The impressive scenography, transporting the spectators to the magnificent royal court and to the mystical scenes by the lake, is the work of Ivan Tokadjiev. "For the first time we are showing a combination of painted and printed decor," said Tokadzhiev about what is considered the most beautiful production of the immortal ballet classics on the home stage. Blue is chosen as the main color of the decor. Some of the scenes also use multimedia, which strengthens the audience's senses.

Along with the characters of the White and Black Swan / Odette and Odilia /, which include the young, beautiful, talented, inspired and extremely focused in the challenge of her creative task prima ballerina of the Burgas Opera Ivanina Ivanova, come to life those of the evil magician Rothbart, performed by Teodor Tsakov /debut/, who cursed Odette and her friends with a cruel tragedy - during the day to turn into noble beautiful birds, and only after sunset they again take on a human image. In the role of Prince Siegfried, who falls in love with Odette, noticing her on the shores of the lake, is the prime minister ballet dancer Emil Yordanov. The characteristic image of the Jester is recreated by Daniel Tichkov. The princess, Siegfried's mother, is performed by Dobrina Bahova. Svetlan Nikolov enters the image of Wolfgang. The performance is also attended by Polina Ivanova, Daniela Turtumanova, Adriana-Maria Manasieva, Stoyan Fartunov, Natalie Ivanova, Iva Ovcharova, Patricia Soares, Ognyan Ivanov, Stefan Tipikov, Georgi Banchev, Yana Berduta, Ivana Fialkovska, and others.

Tchaikovsky's immortal classic in four acts, Swan Lake, is thought to be watched at least once in a lifetime. The fabulous plot, exciting music, and stunning costumes manage to hold the attention of even the youngest viewers. As the ballet has been reworked over the years, the ending is performed in a different way, with the outcome being either happy or dramatic. In one version, the lake engulfs the lovers on their way to the afterlife, and in the other end, he is happy - Siegfried defeats the evil wizard and frees his beloved Odette from magic. In Prof. Mehmedov's interpretation, the radiant forces of the Good are fundamental… 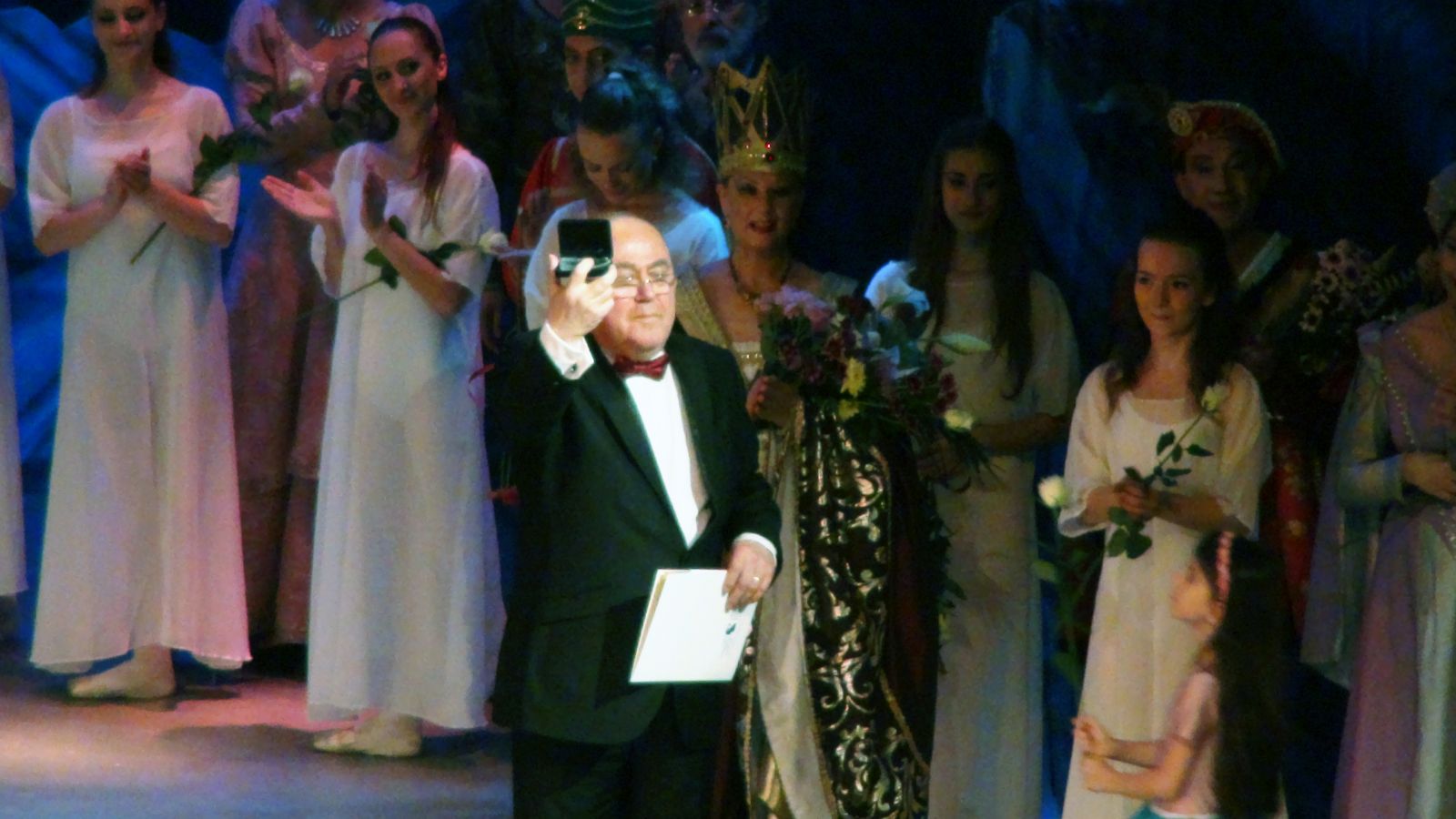 Impressive, large-scale, intelligently presented - with creative scope, aesthetic vision, and brilliant attention to detail, are the productions of Prof. Hikmet Mehmedov. The staging and choreography, impressive with artistic perfectionism and creative scope, transporting the audience into fairy-tale dimensions, where aesthetics and a sense of balance rule, are characteristic elements of the creative portrait of Professor Hikmet Mehmedov. Each performance, directed by him, is another attestation for the penetrating vision of the director, for the philosophical coloring - with depth, emotional color, and semantic argumentation, of the constructed images, for searching and achieving extreme levels of aesthetic suggestion, for a sophisticated approach to each element. , which intertwines in the overall picture of a finished beauty.

"A Night in Paris", "The Hazelnut Crusher", "Swan Lake", "Cinderella", "Romeo and Juliet", "Sleeping Beauty", "Scheherazade / Romantic", "The Doll Fairy", "The Waltz / Bolero", "Spring Sacrament / Love Magic ”, the choreography of the large-scale opera production“ Aida ”and many other productions realized on the stage of the State Opera in which Prof. Mehmedov has woven his creative impulse and original author's handwriting.

After the furor of the premiere ballet performance "Swan Lake", the director Prof. Hikmet Mehmedov was awarded the Crystal Necklace, a prize of the Union of Bulgarian Musicians and Dancers. It was presented to the choreographer by Prof. Dr. Julian Kuyumdzhiev. The award was given on the occasion of 45 years of creative activity of Prof. Mehmedov and his exceptional successes as a choreographer and pedagogue. In the following year, 2017, Prof. Mehmedov received the prestigious Golden Muse Award for his production of Swan Lake. The award was established by the Association of Bulgarian Choreographers and is held for the first time in 2017. The event is one of the most important annual events for the dance world in Bulgaria.

Hikmet Mehmedov's productions "Sleeping Beauty", "Swan Lake" and "Cinderella", which were broadcast online in the classical music program "Together in Crisis", initiated by the Bulgarian National Radio and the Sofia Philharmonic, when cultural institutions were closed and the audience lacked performances. live, were viewed a total of over 20,000 times, and the feedback was extremely positive.

Two days before the official celebration of the anniversary of Prof. Hikmet Mehmedov - on August 11, at 6 pm, in the hall of the Puppet Theater will be presented the book dedicated to his career "Four names for one person", by Nedko Georgiev, which is dedicated to the 70th anniversary of the prominent ballet director, choreographer and pedagogue Professor Hikmet Mehmedov. 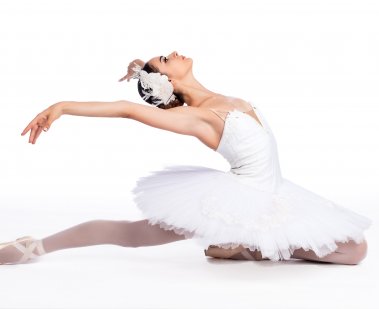 For the soloist Ivanina Ivanova:

The young and reliable ballet prima Ivanina Ivanova graduated from NBU "Mihail Lakatnik", Burgas, and NUMSI "Prof. Pancho Vladigerov ”- Burgas. Ivanina Ivanova is well known to the fans of rhythmic gymnastics in our country, she competed for "Chernomorets", as well as in the ensemble of the Burgas club. She played the lead role in "The Hazelnut Crusher", staged by Prof. Hikmet Mehmedov and the State Opera - Burgas and ballet lovers watched her in the exotic "Bayaderka" and "Sleeping Beauty", in the role of Princess Aurora herself.

Ivanina Ivanova also has quite a few awards: